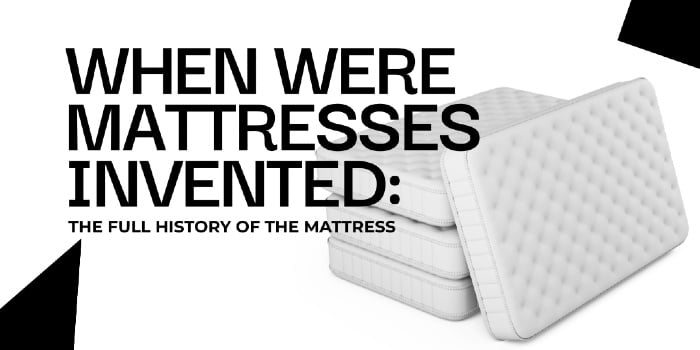 Sleep is as old as history itself. But the modern-day of thinking about sleep – being cosy and tucked up on your mattress – is a new invention.

So, how did we come by mattresses, and why do we now use them? And, more importantly, are they the best things that we can have for sleep?

Find out the answer to when were mattresses invented and more, with our look back on the full history of a mattress.

When were mattresses invented?

When it comes to when the very first mattress was invented, the short answer is nobody knows. Generally speaking, before the Homo erectus species discovered fire, our predecessors would have been thought to sleep in trees rather than the ground. That means that mattresses could predate homo sapiens themselves.

The earliest we’ve ever found evidence for a mattress was built more than 77,000 years ago.

Found in a rock shelter in South Africa, it was less than an inch thick, measuring roughly 3 feet by 6 feet. So, by modern-day standards, it would be a tight squeeze if you’re on the tall side. It was made from leaves, grasses and plants that were most likely used to repel insects such as mosquitos at night.

From that point, evidence of mattresses popped up throughout history. In ancient Egypt between 3000 and 1000 BCE, the Egyptians used a wooden structure (or ebony, if they were wealthy) to create a raised sleeping surface. This was designed to protect them from pests and snakes on the ground, and in some cases, were decorated with jewels. That’s a lot fancier than bedframes you see in the store today.

The mattress itself was made from wool and were often topped with linen bedding. Some of these beds even used a wooden or stone head support at the base as a pillow, but I don’t think that could have been too comfortable.

From practical to social use

Like the Egyptians, the ancient Romans also preferred to sleep off the ground. However, their sleeping arrangement often had to be reached with a ladder or stairs, making them more akin to bunk beds. For the average Roman, mattresses were stuffed with hay or reeds. If they were wealthy, they could afford a wool or feather filling.

As well as a place for sleeping, these mattresses were used as a place to socialise and dine. I think I’d feel a lot better at parties if I could snuggle up and take a nap.

Similarly in ancient Greece, they developed a type of furniture called Klines. Although they looked closer to a sofa than a bed, these Klines were used for reclining, eating and sleeping.

During the medieval period, the stereotypical ‘bed’ started to become commonplace. The frame itself was usually made from wood, while the mattress was stuffed with straw or down.

As the 12th century came about, beds began to be seen as a symbol of power and wealth. The wealthy didn’t just have beds, they had beds carved with ornate drawings and embroidered mattresses filled with down.

The poor of course, didn’t have beds. However, they made rudimentary beds out of stray and hay to sleep on the floor.

Throughout the renaissance, beds increased in popularity and the four-poster beds, with curtains and elaborate decorations, became prestigious amongst the wealthy. Beds were seen as such a status symbol that King Louis XIV became known for having 413 of them. Gosh, imagine having to change the sheets on all of those.

By the 19th century, mattresses began to evolve more into the modern-day ones that you might have in your home. This was thanks to coil springs.

Introduced in 1870, coil spring mattresses were made from several steel coils inside the soft material. Offering more support than just down or feathers inside linen, the coil springs were designed to compress when you put weight on them, springing back into shape once you got up.

Spring coils were so successful, that we still use them today in innerspring mattresses. We have, however, made some advances to the type of coils used, including:

But mattress innovation didn’t stop when spring coils were invented.

By the 20th century, we had the power to mass manufacture mattresses – and innovate the materials to produce better quality and long-lasting mattress types.

As well as innerspring we have memory foam, latex or hybrid mattresses – as well as water beds, air beds and more.

Who invented the mattress?

As very primitive mattresses were first discovered over 70,000 years ago, it’s impossible to say who invented the very first one. However, we do know who invented different types of modern-day mattresses.

The first modern-day and innerspring mattress was created by German inventor Heinrich Westphal in 1871. Following on from his design, the British Canadian James Marshall created the Marshall Coils, creating the next wave of more durable innerspring mattresses that we still use today.

The British firm Harrods, which is still in business today, was the one to invent the modern concept of the waterbed in 1985, which were sold by mail order.

The company Dunlop created the first latex mattresses. This was initially sold only to the British Royal family, before being released to the wider public.

And lastly, memory foam mattresses were invented by NASA. They initially developed memory foam as a way to improve aircraft cushion safety, with the idea that the foam would mould around you and then ‘remember’ its original shape to bounce back to life. Now, memory foam isn’t just used for mattresses but is used everywhere from shoes, slippers, travel pillows and more.

What were mattresses made of in the early 1900s?

By the 18th century, the materials used were improving from straw, hay or down in an attempt to stop attracting bed bugs and vermin. Instead, mattresses began to be made from coconut fibre, wool, or horsehair and were wrapped up in either linen or cotton covers. During this time, buttons or turfing were also used to tie the cover together.

During the mid-19th century, innerspring mattresses were invented. So, by the end of the 19th century, they were made from natural materials such as coconut fibre, wool, or horsehair, as well as metal coils to provide better support and comfort.

Artificial bed fillings, such as latex, were not introduced until the 20th century.

Are mattresses still the best for sleep?

Mattresses have come a long way over the years, but is it the right way to sleep? Or should we be on the floor? In a hammock? Up a tree?

Generally speaking, yes, a mattress is the best way for us to sleep at night. It provides comfort, helping you go to sleep – as well as supporting our muscles and keeping our spine aligned in the right position to avoid aches, pains and soreness in the morning.

However, it’s worth saying that there’s no perfect sleeping solution for everyone. Some people need harder, more supportive surfaces at night, such as orthopaedic mattresses. Some people prefer a soft mattress, but need to use a pillow between their knees rather than underneath their head to achieve their perfect alignment.

Some people find mattresses too hot and uncomfortable and will need a cooling mattress protector to keep them cool during the night.

Whatever solution you need, Sleep4Beginners is here to help you find the right one to get your much needed 8 hours a night.

Then it’s time to get a new mattress that’s more suited to you.

To help you out, we’ve reviewed some of the best mattresses on the market. These are our top three contenders.

The Ergoflex 5G mattress is one of the best-rated mattresses in the UK, and one of the few online ones that offer true orthopaedic support. Made from medium firm-memory foam, it’s a long-lasting option that offers both incredible support and comfort.

Offering a complete lifetime warranty and an amazing 365 night trial period, Nectar is incredibly confident about the mattress that they offer. And they have every right to be. It’s a comfortable memory foam one with amazing motion transfer absorption, meaning that no matter how much you turn in your sleep, your partner won’t feel a thing.

Unlike our other top picks, the Simba mattress is a hybrid that provides incredible cooling throughout the night. Designing their own innerspring (called MiQro) the Simba mattress is built in a way that will push warm air away from the soft, memory foam layer for a comfortable and cool nights sleep.

Find the key to getting a good night’s sleep with our range of sleep tips and advice here.