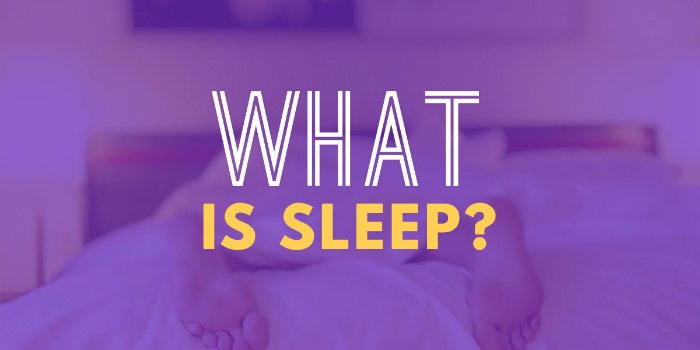 On average, people sleep for one-third of their entire lives.

Sleep is incredibly important for our health, mood and wellbeing. It’s also one of the most natural things in the world. Every animal sleeps. It’s something that fully ingrained into our nature and should be one of the easiest things to achieve.

Yet, so many of us have problems with getting the right amount of sleep every day.

The NHS reported that nearly one in three people in the UK are severely sleep-deprived. In America, around 70 million people suffer from sleep disorders.

It’s a big issue. But you can’t begin to fix a problem if you don’t understand it.

Why do we sleep?

Sleep is incredibly important to keeping us happy, healthy and functioning at our best.

It helps us process everything we’ve learned in the day and remember it for the future. It removes toxins in your brain that build up while you are awake and gives your body a chance to rest and recover.

The younger you are, the more sleep you need to grow and develop. According to The Sleep Council, the recommended amount of sleep per age group is:

That may look like a lot of sleep, but every hour is essential.

Humans aren’t designed to keep going 24/7. We need a chance to rest, recuperate and restore our strength and energy.

Think of your body as a battery. There’s only so much power inside of them, and when they’re empty, that’s it. You can’t just demand your TV remote to work on sheer willpower alone. Batteries need to be recharged before you can use them again.

Sleep is our natural way of recharging and bringing ourselves back to normality.

What happens if we don’t get enough sleep?

Lack of sleep can have a massive effect on your health. But don’t go straight into panic mode just yet.

Having the odd bad night might make you feel slow, lethargic and grumpy the next day, but it’s not likely to have long term effects on your health.

The real problem comes with chronic lack of sleep.

After a few days of no sleep, your judgement will be clouded and reactions slower. This makes you more prone to mistakes and accidents, like falling over. In some cases, this can lead to serious injury or worse, particularly if you’re driving or operating heavy machinery.

The less sleep you get in the long term, the worse the side effects are.

It interferes with your metabolism, increasing your risk of diabetes and obesity. It lowers your immune system, putting you at risk of illness and infection, as well as conditions such as high blood pressure or even heart disease.

In addition, if you suffer from depression, seizures, or migraines your symptoms will worsen.

How is sleep controlled?

Generally, our sleep is controlled and regulated by two main systems: the circadian rhythm and the sleep drive.

It works by responding to the environment around us. When it’s dark, it will send signals to your pineal gland in the brain. This starts the production of the hormone melatonin, which helps put you to sleep.

If it senses a lot of light, it will tell your body that it’s day time and will stop producing melatonin, helping you stay awake.

Your sleep drive is what monitors the level of sleep. It monitors how long you’ve stayed awake and after a certain level of time, it causes you to feel tired when it’s time to turn in for the night.

Every hour you stay awake, the stronger your sleep drive gets.

In some ways, your sleep drive is like hunger. If you need food, your body will let you know that you’re hungry and you’ll get the urge to eat. The longer you go without food, the hungrier you are.

But your sleep drive is more than an urge to sleep.

If you’re exhausted, your body will take over control and put you to sleep. It doesn’t matter where you are, whether you’re watching TV, working at your desk or trying to refuel in your favourite coffee shop. If your body has reached its limit, it’s game over.

How do we fall asleep?

If you’ve ever struggled to fall asleep, you’ll know that sleep isn’t something that happens by simply ‘closing your eyes and drifting off’. If only it was that simple.

It isn’t like flicking off the light switch. There’s no ‘ON/OFF’ mode or straightforward ‘sleep’ button that’s pressed to get you to sleep. If there was, parents all over the world would be rejoicing.

Sleep is controlled by several different parts of the brain working together to slowly send you off to the land of nod.

Most of it is controlled in a small, yet important part of your brain called the hypothalamus. This is what controls the release of hormones and regulates your body temperature. It’s also here that your circadian rhythm lives.

Inside the hypothalamus lives clusters of cells called the suprachiasmatic nucleus (SCN). These cells receive and process information about light exposure directly from your eyes.

When it’s dark outside, the SCN processes this information and sends a signal to your pineal gland to start producing melatonin.

But it doesn’t stop there.

The hypothalamus also sends a message to your brain stem. Located at the base of the brain, this works with your hypothalamus to also create a chemical called GABA. This is a naturally occurring amino acid that blocks certain brain signals to decrease activity and help get your brain ready for sleep.

The brain stem also sends signals all over your body to relax your muscles. This helps shut down the rest of your body and ensure that you don’t try to physically act out your dreams.

In addition, the basal forebrain also helps send you to sleep by forming part of your sleep drive. It does this by releasing a chemical called adenosine, which makes you feel sleepy. The more adenosine released, the sleepier you are and the more your sleep drive is trying to put you to sleep.

Caffeine blocks the actions of adenosine. This is why you can stay awake longer on caffeine – but don’t often feel refreshed or energised. Your body still needs sleep. Caffeine just prevents adenosine from doing its job so you don’t feel as tired.

What happens when we’re asleep?

Falling asleep isn’t the end of the story. Our body doesn’t just shut off until the next morning. It’s still undertaking a lot of busywork that we’re just not aware of when we’re asleep.

In fact, the amygdala, which helps us process emotions is more active than usual when we’re in a deep sleep. It’s what helps us deal with events and emotions from the day. So, when someone tells you to sleep on a decision, they mean it literally.

When we fall asleep, our bodies move through 5 different stages of sleep. This is called the sleep cycle.

Going through the complete sleep cycle takes up no more than 90 minutes. It’s something that you’ll go through an average of 4-6 times every night until you wake up.

What happens when we’re asleep depends on which stage of the cycle you’re in. These are the 5 stages of sleep.

This is the lightest stage of non-REM sleep. It’s where you start to transition from wakefulness to sleep. So, your breathing and heart rate will slow. Your muscles relax and your brain waves will begin to quieten down as your thoughts drift off.

This only lasts for a few minutes and is the easiest stage of sleep to wake up from. Ever felt yourself start to drift off only to jolt awake by a sudden noise? This is that stage.

Nearly 50% of your time asleep is spent in stage two.

Stage two is another phase of light non-REM sleep that you go through before you enter deep sleep. It’s where your eye movements stop and your brain waves fully slow down, apart from an odd burst of electrical activity. These waves are called sleep spindles and are thought to protect you from waking up from this sleep.

During this stage, your muscles relax even further and your body temperature drops, preparing to take you under a deeper sleep.

This is where your deep sleep happens.

Stages three and four as similar processes, which means that they’re often grouped together. Some resources will even state that there are only 4 stages of sleep, counting them both as one.

These stages of non-REM are where your body energises itself to feel refreshed and awake in the morning. It’s the time where your heartbeat and breathing slow to their lowest, your muscles are completely relaxed and you’re less likely to be woken up.

Ever tried to wake someone up and they just wouldn’t budge? Or been surprised that someone managed to sleep through the fireworks or even a small earthquake? This is probably the stage of sleep they were in.

This is the stage of REM sleep – and where most of your dreams happen.

Unlike deep sleep, your brain is pretty active during this stage, particularly the thalamus. This is the part of your brain which sends information from your senses to the cerebral cortex, where memories are stored. Most of the night, your thalamus is quiet, letting you tune out the world and let your thoughts disappear.

But during REM sleep, the thalamus becomes active again, sending images, sounds and other messages to your cerebral cortex that become a part of your dreams.

The exact purpose of dreams is unknown but is linked to how we process thoughts, emotions and memories of the day. Interestingly enough, 12% of people dream entirely in black and white.

This thought to be linked to exposure to black and white televisions, as the percentage used to be higher and steadily dropped as colour televisions became common.

If someone wakes you while you’re in this stage of sleep, you’ll feel groggy and more tired than usual. That’s why if you’re setting alarms for the following morning, it’s often best to set them for when you’ll be in a lighter stage of sleep.

Once this stage is complete, your body will naturally cycle back into stage 2 and complete the cycle again.

Some of the most common sleeping problems are caused by changes to your circadian rhythm.

For example, people who suffer from blindness often have some difficulty sensing changes in light, making it more difficult for your body to create a natural sleep routine.

On the flip side of this, if you’re exposed to a lot of light, particularly blue light, your SCN has a hard time figuring out when night time is. Which means your body won’t release the hormones you need to go to sleep, keeping you up for longer.

Some sleep problems are also caused by interfering with your sleep drive. For example, taking naps during the day time can also cause problems getting to sleep at night. This is because it throws off your sleep drive, lowering your bodies’ natural desire to sleep. It’s the same principle of snacking before a meal and ruining your appetite.

These aren’t the only reasons people have sleeping. Sometimes it can be down to simple things, like medication or too much caffeine. But other times the reason can be more complicated.

However, the first step to understanding and helping solve a sleep problem is to know what is sleep and how it works.

With this knowledge, you’re on your way to a healthy night’s sleep.