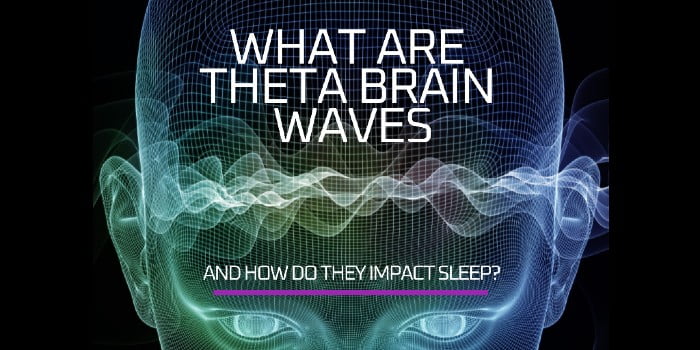 The human brain is a complex, wonderful and magical thing. No matter if your asleep or awake, your brain is always active and communicating with each other and different parts of your body through bursts of electrical activity.

But, not all electrical activity in the brain is the same. It has different gears and statuses suited to the job at hand, going from a slow first gear right into hyperactive.

These different gears are brain waves. Delta, theta, alpha, beta and gamma brainwaves to be precise. Each one has a function that we’ll go through. But this article will ultimately focus on one of these brainwaves – theta.

So, read on to find out what are theta brain waves and what role they play in your sleep.

What are brain waves?

Brain waves are what we call brains activity. It’s what controls all of our thoughts, behaviours, emotions and actions.

Each action or thought is controlled by an electronic signal that’s passed between the neurons of your brain. It’s so-called because it’s a ‘wave’ of electrical impulses that convey the message.

They can be incredibly fast – or slow depending on the type of brain wave that’s used. That means that although your brain is always ‘on’, it will use a slower, lower gear when you need to rest and not think as much.

If you’ve got a big task or problem ahead of you, it will up the speed and kick start a faster, more active brain wave to help you process more information and solve the task at hand.

We’re learning more and more about them every day. But right now, we’re able to measure the different types using a test called an electroencephalogram (EEG). This test attaches small metal electrodes to your scalp and measures the electrical impulses that go through your brain and how fast they travel.

Each of the five brainwaves is then classified depending on how often the wave passes around your brain per second.

What are the different types of brain waves?

Brain waves are categorised into different types depending on the frequency of the wave.

Brain wave frequency measures how often a wave will repeat itself within a second. So, ones with higher frequency will have increased waves per second.

Breaking the frequency down into different categories gives us these 5 types:

This is the lowest frequency brain wave that a human can produce and mostly happens in the deepest parts of our sleep when the body wants to decrease sensations and its awareness of the world around it.

Delta brainwaves are essentially the brainwaves we admit when we don’t want to focus. It’s the brain’s way of turning off and makes paying attention nearly impossible.

For people with ADD (Attention Deficit Disorder), delta brain waves are responsible for a lack of focus, as the body will produce more instead of less, when they’re trying to focus, making the task nearly impossible.

Although having a faster frequency than delta brain waves, theta is classed as a ‘slow’ brain wave activity. It’s most associated with:

Like delta brainwaves, theta brain waves are seen most during sleep – this time during the REM (Rapid Eye Movement) stage of sleep.

This is where the brain is most active during the night and is where it processes emotions and memories from the day. It’s also the time that you are likely to dream.

In most adults, theta brainwaves are rarely seen when awake. However, it is the common one present during mediation, mindfulness, prayer or other spiritual awareness activities designed to slow down the mind and stop thoughts from racing.

Alpha brain waves happen when a person is awake and alert, but not actively processing information. This type is thought to bridge the conscious to the subconscious and is used to help people move quickly and accomplish tasks at hand.

Alpha brain waves enhance a sense of overall relaxation and fatigue and help people mentally coordinate their current task. It’s like when you’re doing the dishes, you don’t need to overthink or stress about them – but your brain is coordinating all of your movements to make sure the dishes are clean and piled on the side in a dish-Jenga block that won’t fall over.

Beta brain waves are the dominant state that we’re in when we’re awake. It’s when we’re thinking about the world around us, solving problems or undergoing regular tasks. The range of beta brain waves can vary on what you’re currently doing and how much mental energy they excerpt.

Gamma brain waves (30 Hz and above)

Gamma brain waves are the only one that’s present in every single party of the brain. It’s associated with tasks or activities that require the use of different parts of your brain at once, rather than just one area at a time.

Those that have good gamma brain waves are also thought to have a good memory – whereas those with learning disabilities will struggle to emmit this type.

Why are theta brain waves important?

Each type of brain wave possesses an important function. For theta brain waves, this function is to help process thoughts, emotions and memories during REM sleep.

Without the theta brain waves, your body wouldn’t be able to process and store away this information. This could lead to memory issues, as well as behavioural or emotional difficulties in adults, meaning that you’re more likely to overreact to normal situations because you’ve not had a chance to process your previous emotions.

It’s the reason that if someone is tired, they’ll react worse to news.

Theta brain waves happen when you’re asleep. This is usually when you’re transitioning from sleep to wakefulness, or most commonly, in the REM stage of sleep.

REM sleep accounts for roughly 20-25% of your night’s sleep. And despite being asleep, it’s actually when you’re the most active during the night. During this stage, your body will start to process emotions, memories and events for that day.

It’s also where you dream, as those theta brain waves take over from the more dormant delta waves that occur during deep sleep.

Without theta brain waves, you’ll be unable to process these emotions and memories, leading to difficulty remembering or overreacting to events in your life as you’ve not had a chance to rationalise or process any of your feelings.

Problems with theta brainwaves could also lead to sleep disorders, including REM sleep behaviour disorders which cause people to ‘act out’ their dreams.

Do theta brain waves help you go to sleep?

Different types of brain waves instinctively take place depending on the type of task that you’re currently performing. If you’re doing something that requires a lot of thought, your brain will emit beta or gamma brain waves to help you. If it’s relaxing and doesn’t need focus, your brain will supply lower ones such as alpha or theta.

This means that you can in effect, train your brain to emit a certain type of brain wave when you need it.

Theta brain waves are not only present in REM sleep, but as the body transitions from wakefulness to sleep. This means that by ‘practicing’ theta brain waves, you can help your body fall to sleep.

It’s the same principle as having a sleep hygiene routine designed to calm down your mind and body before bed.

One way to train and practice brain waves is through binaural beats.

Binaural beats are sounds set at certain frequencies, designed to trick the brain into slowing down its own brain waves and switch to lower frequencies, such as theta.

It’s done by playing two tones of similar frequency at the same time, using headphones. Hearing both of these frequencies at the same time, the brain tries to work out the difference between them and creates a third, different frequency.

Hearing this 3rd frequency, the brain will try and match it and play along. This changes the type of brain waves that it immits, helping to slow down your thoughts, relax your mind and prepare your body for sleep.

Binaural beats aren’t the only way to slow your mind down to get a good night’s sleep. There are a ton of things that you can do inside your own help to aid your sleep, including:

Find our full range of sleep tips and advice here.