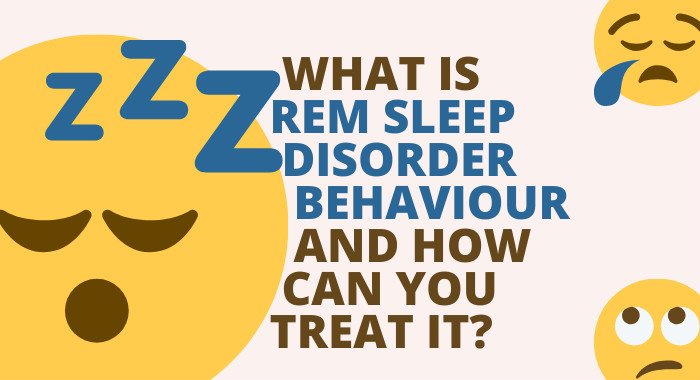 A little tossing and turning during the night is normal. But once you enter REM sleep, there’s no more movement. You should be still and dead to the world, while your brain processes your day and fills your mind with dreams.

However, there is a sleep condition that prevents this from happening. Instead of sleeping peacefully, you’ll start trying to act out your dreams, moving or shouting in the night.

This is called REM sleep disorder behaviour. And with strong links to Parkinson’s disease, this is a sleep condition that you need to keep a close eye on. That’s why we’ve put this guide together with all the information you need to know about the condition, its causes and how to treat it.

First, because this disorder happens during the REM stage of sleep, we’re going to have to delve further into the sleep cycle before we can fully explain this disorder.

What is REM sleep?

The sleep cycle is broken into two different types of sleep: REM sleep and Non-REM sleep.

REM stands for Rapid Eye Movement. REM sleep is where most of your brain activity happens and is thought to be where your body learns how to process memories, emotions and events from that day. This is where dreams happen.

It’s named REM as underneath your eyelids, your eyes rapidly dart from side to side. This is the only part of your body that should move during REM sleep. With REM sleep disorder behaviour, this is not the case.

Non-REM sleep is the deepest part of your sleep, where even your brain gets a chance to enjoy some peace and quiet. While you’re in non-REM sleep, your body temperature will cool, your muscles will relax and your breathing and heartbeat will slow down, giving you a chance to really rest and recuperate your energy.

Generally, 20-25% of an adult’s night is spent in REM sleep, with more time of your night spent in non-REM sleep. This is why someone with REM sleep behavioural disorder might not be moving all the time but at certain parts of the night.

What is REM sleep behaviour disorder?

REM sleep behavioural disorder means that during the REM stage of the sleep cycle, someone will be able to physically “act out” their dreams.

This doesn’t mean they’ll be able to ride a dragon in real life or will be murdered by the 8 knife-wielding spider from their nightmares. It just means that instead of being temporarily paralysed, they will be able to have control of their limbs and voice – responding to what’s happening in their mind.

You get the picture.

Because you’re in the dream, you might not notice that you have REM sleep behaviour disorder unless a partner points it out – or you wake up with unexplained bruises or injuries.

The good news is that when spotted, REM sleep behaviour disorder can be successfully treated.

What happens if you get no REM sleep?

Sleep conditions that happen during the REM stage of sleep, such as REM sleep behavioural disorder can cause people to wake up and disrupt their sleep. Aside from feeling grumpy and tired the next day, interrupted sleep cycles can have a big effect on your health.

Most of the night is spent in non-REM sleep, so it’s often not reported what a lack of REM sleep can do to you.

That’s because non-REM sleep is the most important part of sleep. Without it, you would put yourself at risk of a number of diseases and conditions, including type-2 diabetes, cancer, and heart disease.

Because REM sleep plays a key role in processing your emotions, it’s thought that several psychological disorders are associated with disrupted REM sleep.

Strangely, suppressing REM sleep can have a positive impact on your mood, as most antidepressants suppress REM sleep. But be clear how long-term REM sleep disruption can influence emotion regulation and may be contributing to further suppression of emotions.

In addition, a lack of REM sleep can also lead to memory problems and further the risk for health conditions caused by a lack of sleep.

REM sleep behaviour is not a common sleep disorder.

If you’re unfamiliar with what parasomnias are, they are conditions which happen during movement between sleeping stages, such as moving between REM sleep or waking up. Parasomnias give out undesirable physical or verbal behaviours, such as walking or talking during sleep.

Examples of parasomnias besides REM sleep behaviour disorder include narcolepsy and sleep paralysis.

REM sleep behaviour disorder is most common in adults between the ages of 50 to 60 years old. In addition, it’s more common in men.

The exact causes of REM sleep behavioural disorder are unknown. But there are a few underlining factors and related neurological conditions that the condition can be related to, such as Lewy body dementia and Parkinson’s disease.

The exact link between the two conditions is unclear, but if you’re diagnosed with REM sleep behavioural disorder, you will need to get regular checkups to help address any concern you may have with Parkinson’s disease.

For some people, REM sleep behavioural disorder can be triggered by alcohol or sedative-hypnotic withdrawal. But in these cases, symptoms are usually temporary until they have gone through the withdrawal stage.

REM sleep behavioural disorder might also be linked to post-traumatic stress disorder (PTSD), or those that have recently experienced trauma.

This is also shown in animals, as cats that have suffered brain lesions will arch their backs, hiss and bare their teeth during REM sleep.

Who is at risk of REM sleep behaviour disorder?

You are more at risk of developing REM sleep behavioural disorder if you are:

But that doesn’t mean you have to be on this list to have REM sleep behavioural disorder. If you’re suffering from any of the below symptoms, consult your GP to get a diagnosis.

What are the symptoms of REM sleep behaviour disorder?

REM sleep behavioural disorder means that you “act out” your dreams. The symptoms of this condition are:

REM sleep behavioural disorder doesn’t happen at once. Symptoms are gradual and can get worse over time.

Symptoms of violence are also on the uncommon side. With this disorder, it’s more likely that the person will cause more harm to themselves than to others.

REM sleep behavioural disorder needs to be diagnosed by a medical professional. So, if you’re suffering from one or more of the above symptoms, see your GP for further advice.

There are a number of tests that they can do to confirm whether you’re suffering from this disorder.

A physical and neurological exam

Don’t worry, this isn’t an exam that you need to study for. This is a non-intrusive look at things like your medical history and reflexes. This is to ensure that there’s nothing else going on that could be causing your symptoms.

Depending on the results of this, further tests may be scheduled.

Talking with your partner

If you don’t sleep alone, your GP may ask your partner a few questions about the symptoms they notice while you are asleep – or even fill out a questionnaire. This is to get a clearer picture of what happens that you might not be aware of.

The biggest problem with sleeping disorders is that, well, you need to be asleep to see what’s really going on.

If your GP thinks that a closer look is needed, they might invite you to a nocturnal sleep study. This is where you spend a night in a sleep lab which monitors you while you’re asleep.

To do this, you’ll be videotaped and monitored by sensors, which will measure things like heart, lung and brain activity, breathing patterns, arm and leg movements, vocalizations, and blood oxygen levels while you sleep.

REM sleep behaviour disorder is easily treated using medications. But before trying out any medications, it’s essential that you remove any risk of injury from your home first.

People suffering from REM sleep behaviour disorder have no control over their actions while they are asleep. If they are not in a safe environment, they can cause harm to themselves or others without even realising it.

So, the first step to treatment is to safeguard your sleeping area.

Imagine you are taking care of a baby that can reach anything. What would you need to remove from your room to make it safe? Follow those same steps – and help ensure that they can’t get out of the bedroom during sleep as well.

This one maybe a little more difficult without physically locking someone into a room. But it may be worth investing in an internal door lock to make it more difficult to get out.

Some of these measures may sound extreme – but it’s about creating a safe environment until symptoms are more under control.

What medications can help with REM sleep behavioural disorder?

There’s one medication that can help nearly 90% of patients be rid of their REM sleep behavioural disorder symptoms. This is Clonazepam.

Clonazepam is a drug that’s usually prescribed to control seizures or fits due to epilepsy, involuntary muscle spasms or panic disorder. The best part is that this drug works almost instantly, with some people seeing a difference on the first night alone.

Other drugs, such as tricyclic antidepressants can also help relieve symptoms, but they’re not effective in everybody.

In addition, your doctor may also prescribe Melatonin, which may help reduce or eliminate your symptoms. Melatonin is a hormone that’s used to regulate sleep and can be as effective as clonazepam in some patients.

Never self medicate. Always see your GP for the best advice if you think you’re suffering from REM sleep behaviour disorder.

REM sleep behavioural disorder is a condition that causes people to physically “act out” their dreams during the REM stage of sleep. This includes moving, talking or walking in your sleep.

If you think you’re suffering from any of the symptoms, see your GP for more advice and medications to help treat this disorder. It’s also recommended to make sure that you create a safe environment for you to sleep in, so you don’t accidentally harm yourself during your sleep.

As well as taking mediation, it’s also recommended to implore good sleep habits, such as avoiding alcohol and helping regulate your sleep cycle.

If you’re looking for more ways to get the best sleep, discover our sleep tips here.