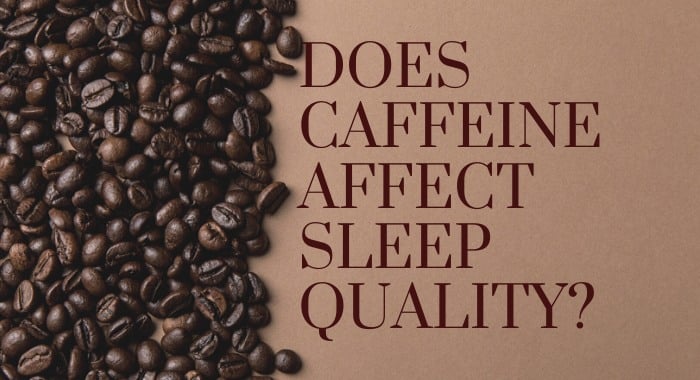 Caffeine is great for helping people feel alert and ready to tackle the day. But does caffeine affect sleep quality? First, let’s talk about caffeine itself.

It’s something we’ve all come to adopt and get used to – as a morning coffee is something that a lot of people say they can’t live without. Hell, I’m one of them. I wouldn’t bother even trying to talk to me before I’ve had a cup of tea in the morning. I’m not at a human level yet.

But with sleepless nights happening more and more frequently, you have to question whether having so much caffeine during the day might be causing more harm than good.

What is caffeine and how does it work?

Caffeine is a natural stimulant that’s found in plants, such as coffee beans, tea leaves, and cocoa beans. It makes you feel more awake and alert as it blocks a chemical in your body called adenosine.

Adenosine is the ‘sleepy’ chemical. It’s what makes you feel tired in the day, helping your body know when it’s time you need sleep. Caffeine blocks adenosine, so your body doesn’t feel sleepy. It doesn’t give you any more energy, it just stops you from feeling tired.

This can be a problem if your body really needs sleep as your brain won’t process that it’s time to go to bed yet without adenosine.

How long does caffeine take to work?

Once ingested, it only takes 30-60 minutes to be at peak level in your blood. What’s more, it takes a long time to break down. After 3-5 hours, the caffeine ingested will be at its half-life. This means your body has only eliminated half of the caffeine, meaning it can stay in your system for over 10 hours.

The time it takes to break down is different for everyone.

If people are used to drinking a lot of caffeine, the body can build up a tolerance to it. This means it will be broken down a lot quicker, and have you reaching for your second cup to make it through the morning.

What are the effects of caffeine?

Caffeine makes you feel more awake and alert. In addition, it can also improve your reaction times, boost your mood and mental performance.

This is more common in people who rarely have caffeine. If you have it every day, you’ll naturally build up a tolerance to the drug and will no longer feel the effects.

Caffeine does come with side effects though. At high doses, it can cause:

In addition, caffeine is incredibly addictive. If you stop taking it, you can go through withdrawal. This will cause headaches, tiredness, bad moods and feelings of low energy until your body gets used to not having it anymore.

The exact effect differs from person to person, as people will respond differently to caffeine based on their age, genetics and usual caffeine intake.

Generally, there are three key ways in which caffeine impacts your sleep.

1. It makes it harder to fall asleep

This is the most common way that caffeine affects sleep quality. Because caffeine blocks adenosine, your body doesn’t recognise that it’s time for bed until much later than normal. This means that you haven’t produced as much melatonin as you should have, taking longer to fall asleep.

The more caffeine you’ve ingested, the longer you may be awake at night.

The effect that caffeine has on sleep doesn’t just depend on the amount of caffeine that you’ve ingested, but the time of it as well. If you have a cup of coffee in the evening, or even some dark chocolate, your caffeine levels will still be high when you go to bed. This will stop you from feeling as tired, making it harder for you to fall asleep.

2. It disturbs your body clock

Your body clock is what controls when to go to sleep and when to wake up. Called the circadian rhythm, this works by responding to the environment around you.

If your body senses light, it assumes its day time. That means you need to be awake. If it’s dark, it’s night time and time to sleep.

If you’re struggling to sleep, one of the biggest tips for improving your sleep is to try and reset your body clock. This helps set you more on a natural rhythm, going to sleep and waking up at roughly the same time every day.

Caffeine can delay the timing of your body clock. This means you’ll be going to bed later than you should be, reducing the total amount of sleep that you get a night.

3. It causes you to get less sleep

Another way that caffeine can affect your sleep quality is by shortening the time you spend asleep – and causing you to wake up more often in the night.

This is more common when caffeine is ingested later in the day. One study saw that consuming caffeine 6 hours before bedtime reduced total sleep time by 1 hour. The cause of this is suspected to be a combination of the above side effects.

Your sleep is made of two different types of sleep: REM and Non-REM sleep.

REM sleep stands for Rapid Eye Movement. It’s named this way as underneath your eyelids, your eyes rapidly dart from side to side. This is because your brain is the most active, being flooded with images, feelings, sounds and other messages.

Currently, there is little evidence that shows if caffeine affects REM sleep. Most reported effects are centred on Non-REM sleep, particularly the deep sleep phase. This is responsible for physically resting and healing your body, and can leave you feeling tired, achy and in pain without it.

However, if you’re not getting enough sleep due to caffeine, it will disrupt every stage of your sleep cycle.

How much caffeine should you have a day?

Technically, you don’t need any caffeine. It’s not an essential part of your diet. It’s an added extra that we’ve introduced through tea, coffee, and chocolate.

In America, the average daily consumption of caffeine is 300mg per person. In England, this is doubled. Yep, the tea-drinking stereotype has doomed us all.

That’s worrying, as it’s recommended that healthy adults should be having no more than 400mg of caffeine a day. It’s no wonder that two-thirds of the UK have reported suffering from sleepless nights.

If you’re pregnant, you should have no more than 200mg a day.

If you’re wondering why you should limit your caffeine, just remember that having a 500mg or 600mg dose of caffeine can have a similar effect as a low dose of amphetamine.

How long before bed should you avoid caffeine?

There’s no definitive answer for this one.

Having caffeine 1-2 hours before bedtime will have a greater effect on your sleep, so evening caffeine is to be avoided. However, caffeine can stay in your system for a long time. If you’re struggling with sleep, it’s recommended to only have caffeine in the morning.

Should I give up caffeine?

Giving up caffeine could be a good idea for those who are struggling to sleep at night. Some sleep professionals will also recommend this to those who have a particularly high intake.

Studies have shown that giving up caffeine significantly lengthened sleep duration and improved sleep quality, as well as helping people fall asleep faster. But again, this varies on the person and the usual caffeine intake that you had.

If you’re thinking about giving it up, remember that caffeine can crop up in other food sources you might not be expecting. If you’re a fan of chocolate, you’ll find roughly 10mg of caffeine in an average milk chocolate bar. The darker the chocolate, the more caffeine it will contain.

Giving up caffeine isn’t a walk in the park though. If you’re used to ingesting a lot of it, your body might go into withdrawal mode. This will mean a lot of headaches, sluggishness, and irritability that you’ve got to push through before you start to see the benefit.

How does caffeine affect sleep quality?

Caffeine works by blocking the chemical adenosine. This means you feel more alert and awake – which can have a negative effect on your sleep.

Most commonly, caffeine makes it more difficult to fall asleep and interferes with your body clock. This means that you’re awake for longer at night and your body will not recognise the time that you should be asleep.

In addition, it can cause you to get less sleep at night or wake up more often, meaning you’ll be a lot more tired the next day. A temptation of that might be to drink more caffeine for a boost, but you could end up trapped in a vicious, tiring cycle.

Because caffeine can last in your body for hours, even drinking it early in the day can interfere with your sleep. That’s why if you’re struggling, you might want to try limiting caffeine intake to just the morning or giving it up entirely. That’s if you can suffer through the withdrawal phase first.

Looking for more tips? Discover our advice on how to improve your sleep here.