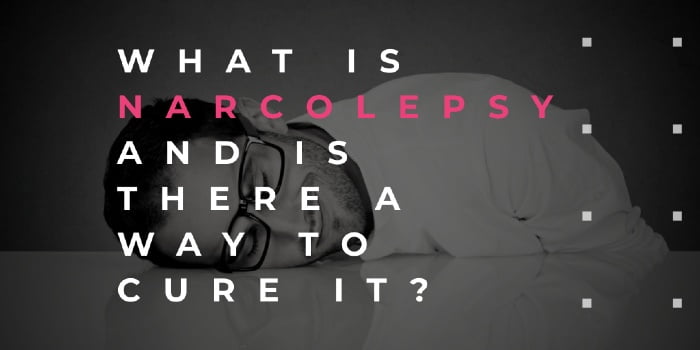 Narcolepsy is one of the most missed-diagnosed and misunderstood sleep conditions out there. One of the primary reasons for this is that people generally don’t know what is narcolepsy, and how it affects people.

When we think of narcolepsy, we think of people randomly falling asleep. Or, in my case, I think of the unconscious Argentinean from Moulin Rouge!, whose narcolepsy caused him to sleep randomly and really call into question his role as the lead actor in a play.

And although falling asleep at inappropriate times is a symptom of narcolepsy, it doesn’t happen to everyone. Narcolepsy is a little more complex than that.

So, to help you understand exactly what is narcolepsy and how to treat it, we’ve put together this in-depth guide on its causes, symptoms and treatments.

Ready to get started?

Narcolepsy is a rare sleep disorder that includes symptoms of excessive sleepiness, sleep attacks, sleep paralysis, and hallucinations. It’s through to affect roughly 1 in 2000 people, although it’s often misdiagnosed so this figure could be higher.

According to the NHS, it’s estimated to affect about 30,000 people in the UK.

This is the type of narcolepsy where someone suffers from cataplexy as a symptom.

Cataplexy is where people will experience sudden muscle weakness. This can cause them to slur words, lose control of their body, and even slump down to the ground as if they’ve suddenly fallen asleep. Cataplexy is often caused by strong emotions, such as excitement, laughter, or even fear.

Cataplexy episodes can last between seconds and a few minutes long and can be pretty frightening to experience or watch someone go through. Imagine telling a joke and watching someone literally fall down in front of you as if they are dead. Yeah, it’s a way to kill the mood.

This type of narcolepsy is what people often think of, but not everyone falls into this category.

This is considered to be the less severe type of narcolepsy as it doesn’t include cataplexy. That means someone with this type of narcolepsy can experience all the other symptoms, such as extreme sleepiness, hallucinations, and sleep paralysis, but without sudden muscle loss.

Related to this type of narcolepsy is a condition called secondary narcolepsy. This is where someone will have type 2 narcolepsy symptoms after experiencing a severe head injury. In addition to these symptoms, these individuals may also have other neurological problems and sleep for 10 hours or more at night.

How does narcolepsy affect the brain?

Part of understanding what is narcolepsy is knowing how it interferes with the brain and the typical sleep cycle. Normally when we go to sleep, we go through 5 stages of a sleep cycle. The different stages of this cycle help rest and relax the body, as well as process information, emotions, and memories.

It takes up to 90 minutes to go through the complete cycle and you’ll undergo it around 4-6 times every night. If this cycle is interrupted or incomplete, you’ll feel more tired, groggy and disorientated the next morning because the quality of your sleep will have been lower.

People with narcolepsy are unable to regulate the normal awake/sleep routines and undergo the normal sleep cycle. Instead, their brain will immediately enter the REM (Rapid Eye Movement) stage of sleep, which should be the 5th stage.

REM sleep is where the brain is most active, and where people dream. By entering this stage immediately, people with narcolepsy struggle to feel rested after they’ve slept, causing excessive sleepiness during the day – even if they’ve slept for hours the night before.

In addition, people with narcolepsy can enter the REM stage of sleep while they’re awake. This results in dream-like hallucinations or suddenly falling asleep without warning.

What are the symptoms of narcolepsy?

People with narcolepsy may suffer from the following symptoms:

In addition, people with narcolepsy are more likely to have other sleep disorders such as restless leg syndrome, insomnia, or obstructive sleep apnea.

For roughly 10% of narcolepsy cases, cataplexy is the first symptom that can appear. This is also often misdiagnosed as a seizure disorder.

Narcolepsy isn’t fatal. But, if left undiagnosed and untreated narcolepsy can have a massive effect on a person’s life, disturbing their work, relationships, and activities.

Certain symptoms of narcolepsy can be dangerous as well, depending on the context. For example, sleep attacks or cataplexy can cause people to lose control of muscles or consciousness at times that could put them into danger, such as when they’re driving, on a cliff or cooking near a fire, etc.

What’s more, automatic behaviours can also be dangerous. This is where a person falls asleep unexpectedly during a task but carries on doing it while they’re asleep. If automatic behaviours are used when driving or operating machinery, mistakes can be made that will cause accidents or even fatalities.

In addition, a lack of sleep also increases the risk of a variety of health issues, including:

You can read more about the side effects of not getting enough sleep here.

The exact cause of narcolepsy is unknown, but it’s suspected to be caused by a lack of a chemical called hypocretin in the brain.

Hypocretin is used to regulate wakefulness and REM sleep. Without correct amounts of this hormone, the body struggles to differentiate between awake and sleep and will cause someone to enter REM sleep more often.

It’s thought that people with narcolepsy have less hypocretin due to an immune response where the body will attack this chemical by mistake.

Narcolepsy has also been linked to:

As mentioned earlier, there’s also a subset of narcolepsy called secondary narcolepsy which can be caused by head injuries or trauma.

Is there a cure for narcolepsy?

No, there’s not a cure for narcolepsy.

However, narcolepsy can be treated and managed through lifestyle changes and certain medications.

How can you treat narcolepsy?

Treatment for narcolepsy can be split into two different categories:

For most people with narcolepsy, a combination of both types of treatment is needed to best manage the treatment. For individual plans and advice, it’s always best to speak to your GP and get support from family and friends in actioning these changes.

Generally, the lifestyle changes to help treat narcolepsy involve trying to change and alter your sleep cycle to combat excessive sleepiness and help your body better regulate your sleep.

There are a number of lifestyle changes that can help treat narcolepsy. These are some of the most common pieces of advice recommended to help sleep disorder.

As the body struggles to regulate sleep in a regular way with narcolepsy, it’s encouraged to take short, controlled naps throughout the day when a person is feeling the sleepiest. This can reduce excessive daytime sleepiness and prevent the person from sleep attacks which may occur during potentially dangerous situations.

This tip is about trying to get the body to adapt and learn a controlled sleep schedule. It involves going to sleep and getting up at the same time every day until it becomes a routine that the body will naturally be able to achieve.

This may also include making sure that you wind down before bed, avoid devices, or even try some relaxation exercises or techniques.

3. Avoid caffeine or alcohol before bed

Caffeine and alcohol are proven to decrease sleep quality and make it harder for people to fall asleep.

This is because caffeine blocks a chemical called adenosine, which is what makes you feel tired. Without it, your body doesn’t feel sleepy and won’t start to go through the correct progress it needs to send you to sleep.

Alcohol also decreases a hormone called melatonin, which is essential for falling asleep.

Exercising for at least 20 minutes per day has been proven to improve sleep quality and help people with narcolepsy avoid gaining excess weight.

Just make sure that you exercise at least 4 or 5 hours before bedtime, as doing it too late in the evening may keep you up for longer.

What medications can be used to treat narcolepsy?

There are a variety of medicines that can be prescribed to help treat narcolepsy.

As with any medication, it’s essential that you see a GP for advice and treatment.

Can you drive with narcolepsy?

Being diagnosed with narcolepsy may impact your ability to drive. When you are diagnosed, you need to inform the Driver and Vehicle Licensing Agency (DVLA) of your condition and complete a medical questionnaire.

If your unique circumstances are severe, you might not be allowed to drive as the risk of causing an accident from a sleep attack is high.

If your condition is well treated and controlled, you’ll usually be able to drive – but will have to have regular reviews to access this condition.

What is narcolepsy – the key facts

There are two different types of narcolepsy. Type one includes symptoms of cataplexy, a complete loss of muscle control, while the second type of narcolepsy does not. It’s often misdiagnosed and misunderstood, but now you know what is narcolepsy and it’s symptoms, you can start treating and controlling it.

Generally, narcolepsy is treated with a mixture of medications and lifestyle changes to help regulate and improve the sleep cycle. If you want more advice on information on how to get a good night’s sleep, you can browse our sleep tips here.

Want to know about other sleep conditions and disorders? Discover what might be keeping you awake at night here.